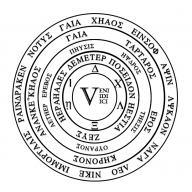 Occupation:
Head of the Old Faith

Old Faith is the Rebirth of the Oldest Religion, relegated to Mythology, no it makes it's return as the Religion it should always have been. Sep 30, 2020