RJM said:
trinity not trigod. indivisible proton is three quarks, that can only exist in combination. heard of proton?

tell again when you left church for islam -- i forget
Click to expand...

2002. trinity never made sense and it was never spoken out the mouth of Jesus who taught monotheism

A couple of verses really pushed me into delving into other spiritual ideologies but keeping in balance my continued belief, for instance; "no man shall teach thee but through my spirit alone" To seek truth by one's means, isn't a wholly externally validated reasoning but co-joins with internal direction specific to each individual.

Always found it interesting instead of mostly convening collectives He convened His disciples individually in the grander scheme. "for God breathed His spirit into the nostrils of man who was molded from the ground" This would be called the spirit of life, which all men share under the same breath.

Christ came in the spirit of truth, what I saw from this verses is this; the spirit of life is the individual spark, something of which is inherent, but if it's not lived by truthfully, how can one be driven to live. Those are my few realizations from these, if anybody thinks my beliefs seem contradictory in any sort, throw in your reasoning and I'll be willing to discuss it, like it's said: "come together and let us reason"

Everybody get together and love one.another right now.

This thread was supposed to be a joyous time to tout your beliefs and be proud of your religion/belief or non belief.

Threads.derail but this is turning into a dick slamming event...not worthy of this site or its members.(pun intended). I have half a mind to delete.the whole.thing and give y'all another try in a year or so.
R

I was going to say something, but then I realized after reading your post @wil that this was not a duck slamming event I was preparing to comment on. Now I'm just going to have to put all my Donald, Daisy, Daffy, Hughy, Dewy and Louie jokes back in the storage locker from whence they were plucked.

With Shabbat about to begin I won't let my disappointment put me in a fowl.... I mean foul... mood.

muhammad_isa said:
To me, the question is illogical.

Logic is the study of correct reasoning or good arguments.
It is human beings that do that and not G-d.
Click to expand...

So do you believe that God could violate the Law of Identity or the Law of Contradiction by creating something that isn't itself or holds two contradictory properties at once, such as a married bachelor?
Last edited: Mar 12, 2022

Everybody get together and love one.another right now.

This thread was supposed to be a joyous time to tout your beliefs and be proud of your religion/belief or non belief.

Threads.derail but this is turning into a dick slamming event...not worthy of this site or its members.(pun intended). I have half a mind to delete.the whole.thing and give y'all another try in a year or so.
Click to expand...

...is it? I thought the informal dialectic was proving fruitful. :c

Ella S. said:
So do you believe that God could violate the Law of Identity or the Law of Contradiction by creating something that isn't itself or holds two contradictory properties at once, such as a married bachelor?
Click to expand...

I don't think that G-d would want to make it difficult for people to understand a correct belief.
It would be mankind who try to pervert belief, by messing about at the edges.

The trinity is a wonderful example of how mankind seek to invent things about G-d.
There is absolutely no need for it.
The argument about what "substance" Jesus is made from, has nothing to do with what Jesus taught whatsoever.

There is no such thing as a square circle or married bachelor. It is pointless rhetoric.

muhammad_isa said:
The trinity is a wonderful example of how mankind seek to invent things about G-d.
There is absolutely no need for it.
The argument about what "substance" Jesus is made from, has nothing to do with what Jesus taught whatsoever.
Click to expand...

Fair enough, but Christ's life and death (and resurrection?) are his teaching. It wasn't just the words Jesus spoke. Mainstream Christian belief is that Christ IS the message -- not just that he preached a message, as God's spokesman?

muhammad_isa said:
There is no such thing as a square circle or married bachelor. It is pointless rhetoric.
Click to expand...

Weeeelllll... Actually, in mathematics, you can construct formal systems with a way to measure the distance between two points, where the definition of a circle (all points equidistant from the central point) comes out looking square.

I find such contemplations to be fun and they help me relax my stance regarding paradox, but YMMV as always.

Your point is well made and not invalidated by this mathematical exercise.

(edited to add: ) It can be worthwile to examine the fundamental assumptions ("what makes a circle round?") once in a while. Whether uniqueness is a property only the number "one" has, or else if every number is unique, even "three", what that might say about the uniqueness of the trinity. Is there unity in this property of uniqueness? As I said, relaxing about paradoxes is something I find useful.
Last edited: Mar 12, 2022
Y

RJM said:
Point is that trinitarian doesn't mean a polytheustic belief in three gods, as some insist whose knowledge of Catholic belief is usually thin and misguided.

Again, obviously not you @Ella S. I won't need to keep assuring you of this?
Click to expand...

RJM said:
There's a difference between understanding what someone believes and agreeing to believe the same. I am willing to learn. I have the right to disagree. I think Jesus died on the cross. I quite understand that Muslins support either the substitution or swoon theory. So I do understand*. I just don't agree.

*In fact I've put a lot of energy into understanding, including reading the Quran -- as you well know
Click to expand...

yitzak tover said:
a god that needs blood of innocent man on cross in order to forgive sins is unworthy of worship
Click to expand...

Do you understand the concept of sacrifice is not blood upon the altar, but to give of yourself a valuable animal or possession to God?

When God asked Abraham to sacrifice his son, it wasn't about the killing or the blood; it was about Abraham being willing to give his most precious possession to God -- his own most precious and beloved son -- with no expectation of anything in return, but just to affirm his total trust in God.

True sacrifice is about giving to God what is valuable to us, with no expectation of return, as a mark of complete trust and faith in God. It's not about the blood on the altar, but it became so. The concept of sacrifice became corrupted and meaningless.

That is why Christ overthrew the tables of the money lenders in the temple, and eventually gave himself up willingly as the last and final blood sacrifice, to end forever the corrupted practice of blood sacrifice, to restore the meaning of the true sacrifice of Abraham -- of Abraham's willingness to give to God even the life of his own most precious son.

So, you see, it's a bit more complicated than your plain statements indicate, and of course the life and crucifixion of Christ hold many other messages and mysteries beyond this one alone.

However you are not expected to understand this
Last edited: Mar 12, 2022 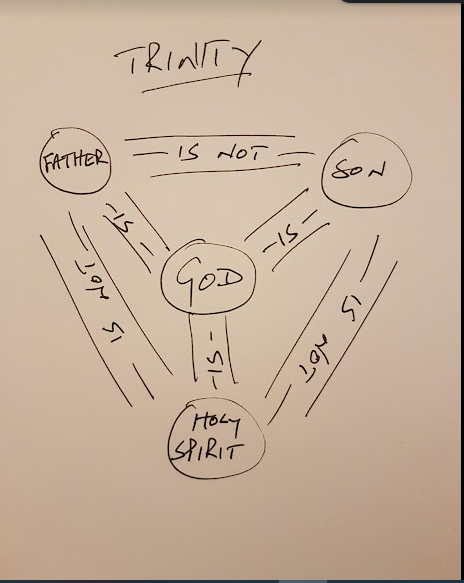 For this forum Interfaith it seems like bicker-city haha

We cannot allow users to be abusive, overly aggressive or to "troll". This does not follow our rules. Further messages may be removed or altered and the posting member's account access may be limited based on these actions.

Interfaith dialogue is characterized by accepting the other person's different worldview, not by trying to make them accept our own, or by showing them the error of their ways. There is too much of that in the world already. We are doing something else here.

Members who continue to misuse this forum as a soapbox to proclaim their personal views without listening to the other participants and without working on a way to make space for others' world views and religions, are misunderstanding the whole point of this forum completely.
Last edited: Mar 13, 2022
You must log in or register to reply here.
Share:
Facebook Twitter Reddit Pinterest Tumblr WhatsApp Email Share Link
Top